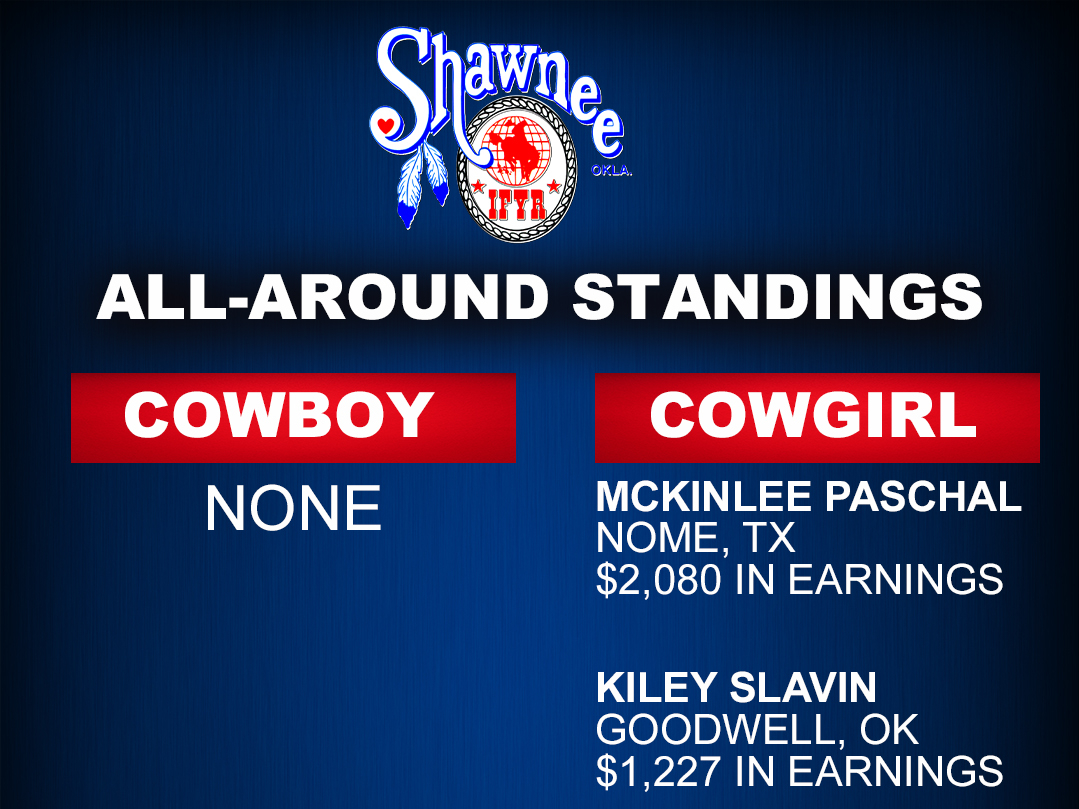 SHAWNEE, OK – As the action got underway at the 30th annual International Finals Youth Rodeo (IFYR) in Shawnee, Oklahoma at the Heart of Oklahoma Expo Center, heated races for the $250,000 payout began to unfold.

Mckinlee Paschal (Nome, Texas) currently leads the Cowgirl All-Around standing with $2,080 in earnings, while Kiley Slavin (Goodwell, Oklahoma) sits a near No. 2 with $1,227 in earnings.

Bryce Henderson (Del Rio, TX) beat out the competition by almost a full second in the tie-down roping. Henderson raised his hands at the 8.4-second mark while Cort Gambino (Lindale, Texas) had the second place time with a 9.0-second run.

A battle for the breakaway roping title began as Summer Williams (Perkinston, Mississippi) surged to the top of the leaderboard with a 2.0-second time, good for the best time of the week. Williams is beating out the remaining of the competition by a tenth of a second.

After the first-go, John Crimber (Decatur, Texas) holds onto the best score with an 83.0, while Tate Pollmeier (Fort Scott, Kansas) and Carter High (Weatherford, Texas) have tied for the number two position with a 71.0 score.

As one of three bull riders to deliver a qualified ride, Quintonn Lunsford (Mccune, Kansas) found himself in the top position with a 75.0 score, edging out Clayton Hibler’s (Wheeler, Texas) 74.5 score.

The IFYR will feature 11 total performances, beginning Sunday, July 10 at 8 p.m. with the final performance and championship round taking place Friday, July 15 at 7:30 p.m. with three arenas running simultaneously during each performance. The event will consist of two long-go’s and a short-go, made up of the top 15 contestants in each event.

Tickets are now on sale and start at $6. They can be purchased at the Heart of Oklahoma Expo Center, or online at IFYR.com.

In this article:2022, IFYR, McKinlee Paschal, Oklahoma, Rodeo, Youth Rodeo
Up Next: