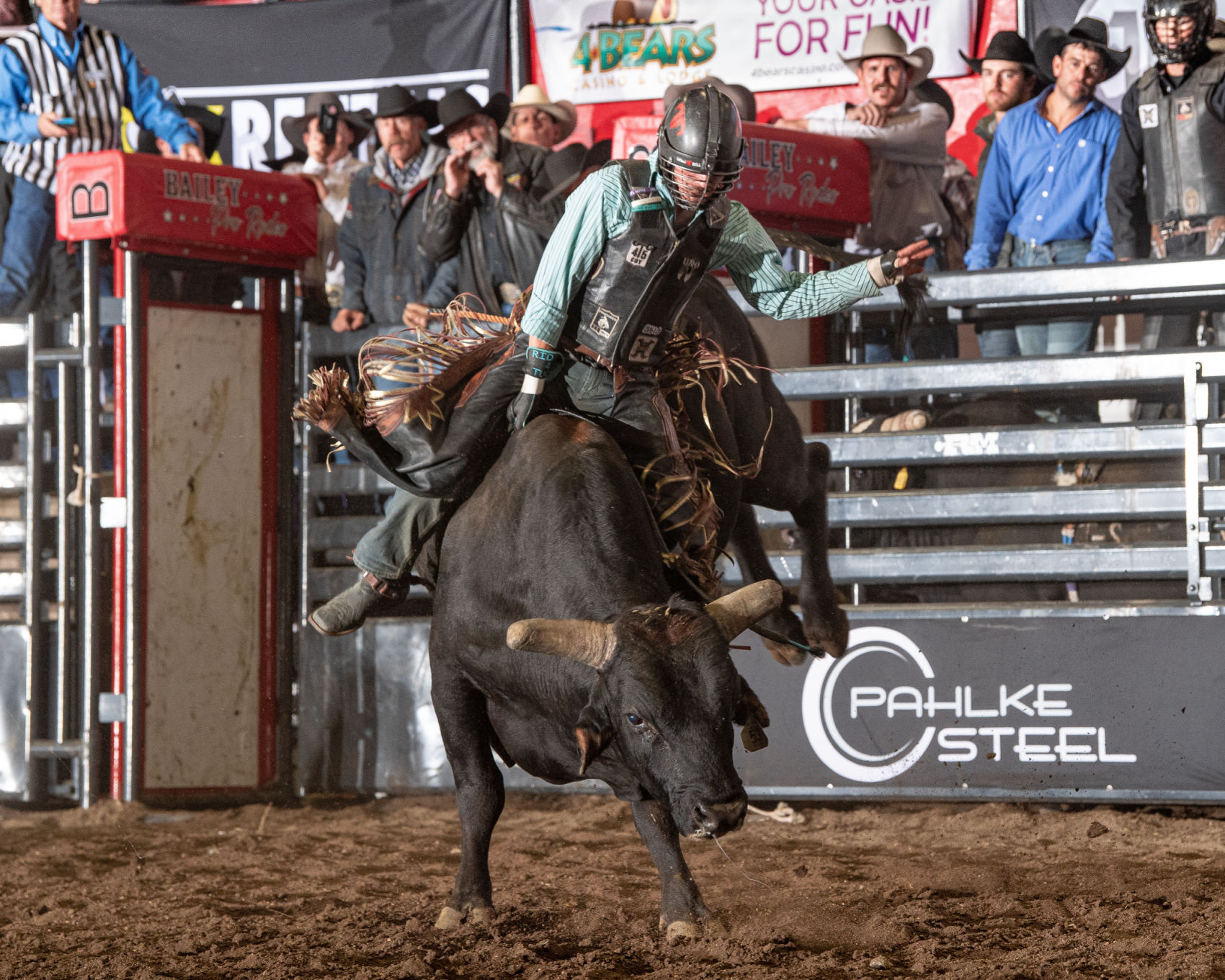 Badlands Circuit Finals Champions are crowned in Minot, ND. Designations are made for NFR Open competitors.

MINOT, N.D. – When Chance Schott walks into the Badlands Circuit Finals Rodeo, it’s like his mojo is back.

The McLaughlin, S.D. bull rider finished as the average champion at this year’s circuit finals, the PRCA’s regional championship rodeo for North Dakota and South Dakota.

He rode two of three bulls for 172.5 points on two rides, eight points ahead of the number two man, Jeff Bertus. No bull rider covered all three bulls.

Each of the four years he’s qualified for the circuit finals, he’s won either the year-end title (the most money won throughout the season) or the average title (the most points scored at the finals rodeo.)

“I love coming here for the circuit finals every year,” he said. “I did really great the first time I came here (in 2019), and I feel great whenever I walk into that locker room. I feel like this is my building and it’s where I capitalize.”

Schott has a particular approach to his bull riding. “I’m keeping a clear mind, sliding and riding,” he said. “Stay calm, cool and collected for each bull, and it worked out, thankfully.”

But Schott has a long ways to go to supplant the number of championships Bertus has earned. Bertus, Avon, S.D., has won nine Badlands titles: four year-end finishes and five average finishes, from 2012 to 2019. At this year’s circuit finals, he was reserve year-end winner.

Rookie Jestyn Woodward won the year-end title, having won more than $26,000 throughout the season.

In the breakaway roping, two South Dakota cowgirls ended up as 2022 champs.

Gilbert came into the Badlands Circuit Finals in second place behind Brandy Schaack, of Chadron, Neb. But when Schaack missed the calf in the second round, she was out of earning money for the average, opening the door for Gilbert.

Gilbert had a bit of a revelation as she backed her nine-year-old bay mare into the roping box for the first night of the finals: it occurred to her that this was the first time the horse had competed in an indoor arena, where the noise, lights, and close quarters can sometimes be distracting.

“I didn’t even think about it till I got to the box,” she said. After the first round, the mare did well. “She stalled in the first round, but worked phenomenal after that. She handled it like a champ.”

Titlists from circuit finals qualify for the NFR Open, held in Colorado Springs in July of 2023, with earnings from the NFR Open counting towards the world standings and a trip to the National Finals Rodeo.

At the 2022 NFR Open, Gilbert didn’t do well. “You have those weekends when you struggle and you make silly mistakes. I want to go back and redeem myself. Me and Colorado Springs aren’t done yet.”

This was the third time Gilbert qualified for the Badlands Circuit Finals; last year, she won the average title.

A veteran and a Badlands newcomer won the year-end team roping title.

Clay Ullery, Valleyview, Alberta, and Matt Zancanella, Aurora, S.D., teamed up to win over $25,000 each for the season.

The pair won second place in the first round and first place in the second round, but only roped one leg in the third round, adding a five-second penalty to their time and taking them out of the average.

The duo paired up two years ago. “I never worry about his heeling,” Ullery said of Zancanella. “I just do my job and I know we’re going to win, if I do my job.”

“It’s been fun, roping with Zanc,” he said. “I like this circuit. The people are great, the rodeos are great. It’s been a really good circuit, and I’m glad we’ve been successful.”

The Badlands Rookie of the Year award went to Austin Hurlburt, Norfolk, Neb.; he won both the year-end and the average title.

Both year-end and average champions will represent the RAM Badlands Circuit at the NFR Open, formerly known as the National Circuit Finals Rodeo, to be held in Colorado Springs in July of 2023. In the event that the same person has won both titles, the second person in the year-end race qualifies for the NFR Open.