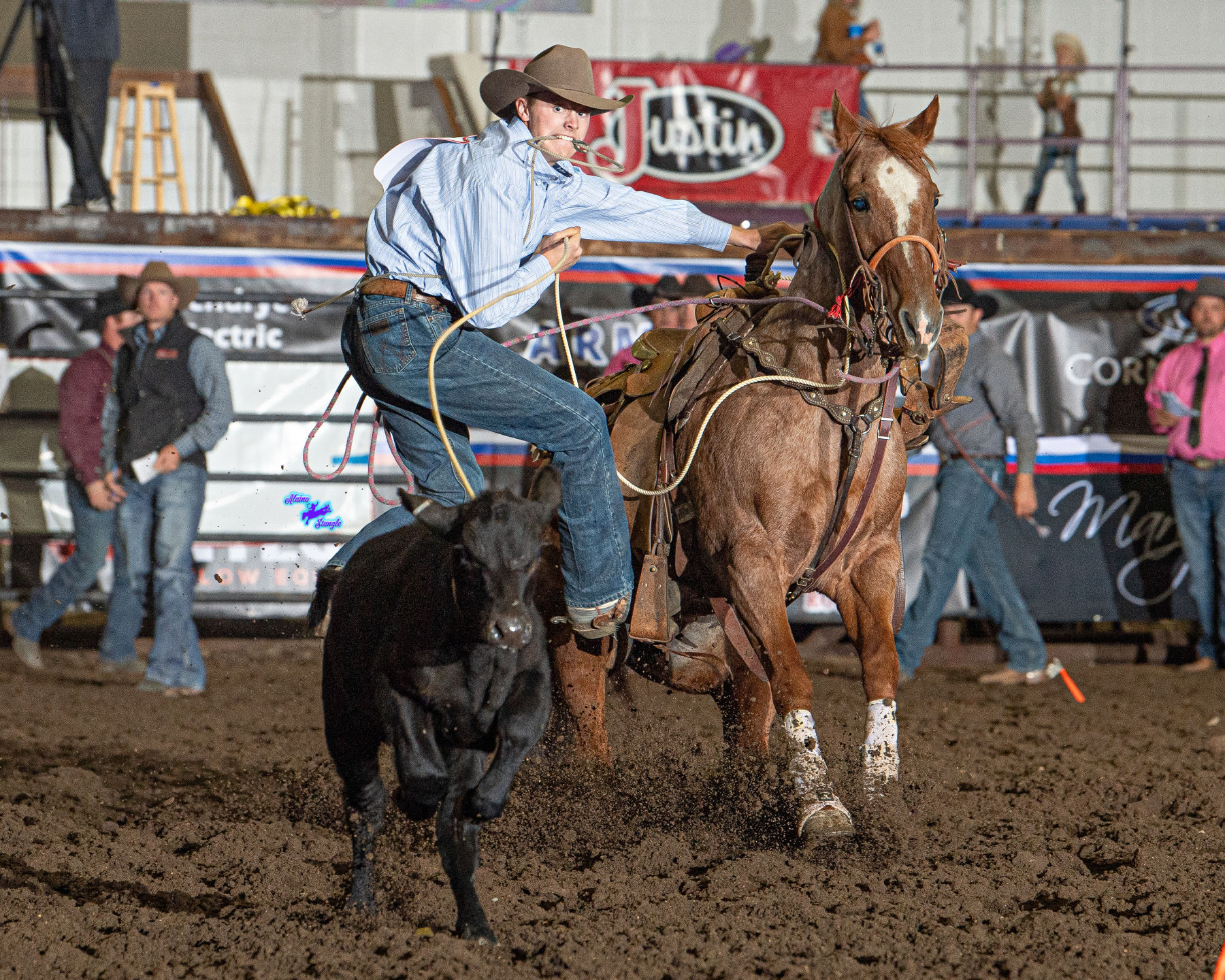 The Norfolk, Neb. cowboy won the tie-down roping and tied for second in the steer wrestling at the Badlands Circuit Finals Rodeo in Minot on Friday night in the first round.

His tie-down roping run was 8.5 seconds, to win the first round; his steer wrestling time was 4.1 seconds, a split for second place.

In high school in Nebraska, he was a tie-down roper and team roper.

In college, Hurlburt added the steer wrestling, thanks to a good coach and a generous Montanan. Dean Wang, the father of one of the rodeo team members, lent his steer wrestling horses to the team, to give them a chance to learn on good mounts.

Tie-down roping is Hurlburt’s first love, but the steer wrestling is a close second.

The all-around title is given to the cowboy who wins the most money in two or more events, and it’s a highly desirable title, because it acknowledges the cowboy’s multiple skills.

Hurlburt is the only cowboy at this year’s circuit finals to be competing in two events, and because he’s won checks in both, he’s unofficially sewn up the finals all-around title.

Winning the all-around is a big deal to him.

“It’s something I’ve always wanted to do, growing up, and watching (26-time world champion) Trevor Brazile, the King of the Cowboys.”

In the saddle bronc riding, a South Dakota man won the first round.

Shorty Garrett, Dupree, S.D., made an 82-point ride on the Bailey Pro Rodeo horse Big Casino to take the win.

“That’s a really nice horse,” he said, “one that everybody would like to have in their backyard,” he joked. “He feels good every time, kicks all the way through (the ride) and I didn’t stumble.”

It was the second time for Garrett to be matched up with the twelve-year-old gelding. He won rodeos in Valley City, N.D. and Guthrie on the horse.

Garrett, the 2019 average winner for the circuit finals, sits second in the circuit standings, behind Cole Elshere, going into the second performance.

The second and third rounds of the Circuit Finals continue Oct. 15-16 with a performance on Saturday night at 7 pm and a Sunday matinee at 1 pm. For more information on the rodeo, visit RodeoMinot.com.

** All results are unofficial.