All you have to do is catch... 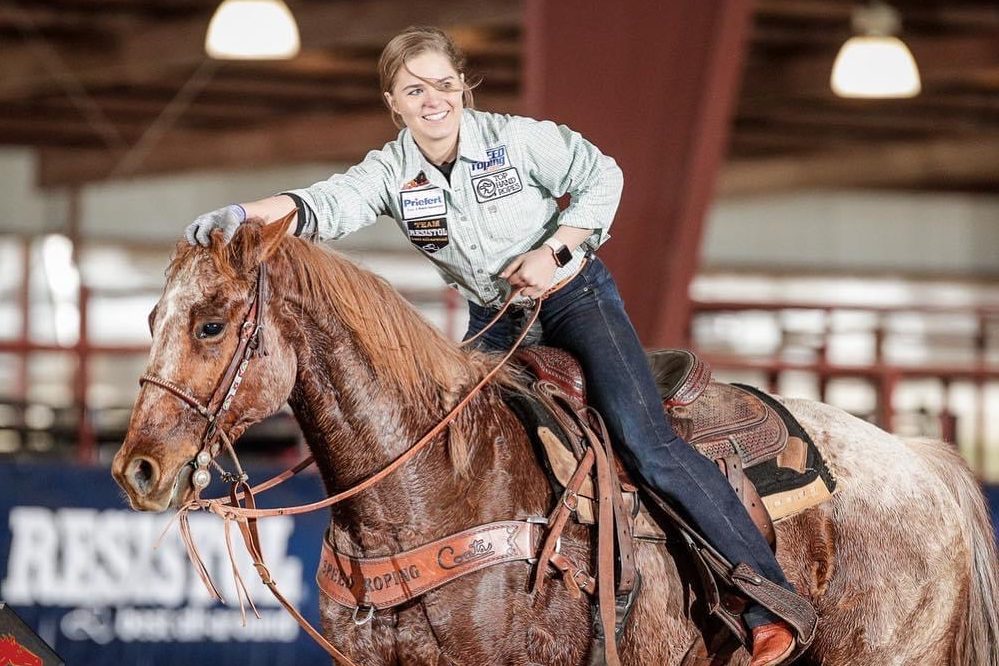 Breaking it Down with Speed Williams, July 2022

Hali Williams during the 2019 Wildfire. Photo by Olie's Images

For quite some time my daughter has been interested in pursuing an education in nursing. Now she’s 18 she is  having some success in the Breakaway world and she’s enjoying everything that goes with it.

A couple of years ago she and I partnered on a 5-year-old that showed a lot of potential. But during the vet check we discovered a chip on his knee. Dr. Buchanan said there was no damage yet, but there’s always a risk with surgery. I’ve never bought a horse with a chip on their knee, but my daughter and this horse looked like they may become something special. They were asking $25,000 for him. I offered them $20,000 and said I would spend the $5,000 for surgery and rehab; or they could do the surgery and rehab and after a clean vet check I would give them the $25,000. They chose to let us do the surgery which is smart because you never know what might happen and if he will come back sound.

Just for the record, in the past I would never buy a horse that needed surgery, but I really thought he was something special, and my daughter fell in love. The hardest part for her was the rehabbing and having to wait to ride him. He needed 90 days of rehab after surgery before we could do anything on him. Afterwards, she got him going and he can run quite a bit. She’d ridden him for a few months and when she started asking him to do more, he got a little hot in the box. That’s when she said, “Dad, it’s your turn.”

I told her I needed him for four or five months. She wasn’t thrilled but understood. I took him and roped the dummy on him, rode him during my schools, and Gabe rode him. I rode him quite a bit while doing lessons every day. I hauled him to different places where we had schools and was heading on him. I told her he had gotten mad a few times but had ridden through it and done outstanding.

In the meantime, Gabe has always wanted to go to the NTRL Finals in Jacksonville and see where I grew up. So, we scheduled some schools in Florida prior to the NTRL Finals. I had Hali fly down to help with the bigger school. She does a very good job. She is very patient and has a knack for it so when I get the opportunity, I get her to help.

At the NTRL Finals I’m roping with Gabe and Brad Culpepper. When I pull in and unload my head horse, we find he has a slight suspensory tear. I called Brad and told him my head horse was lame and all I have to ride is a 6-year-old that’s never been to a roping. He said he didn’t care, and I was still roping. Gabe said the same thing. Brad reminded about when he tried to turn me out at the George Strait years ago because all he had to ride was a 5-year-old that had never been anywhere. I told him I didn’t care, he was coming and had three days to get there, and we were roping. Ironically, we ended up winning the Strait that year. So, he said I had to rope at the NTRL Finals. We placed and our little horse worked outstanding.

I was trying to get Hali to enter the Breakaway at the NTRL Finals that Thursday. She was a little hesitant because she hadn’t ridden him in a few months, but I told her he was ready. She placed twice in the roping and I haven’t gotten my horse back yet. She and Red Light have really done well and have been winning a lot.

At her first pro rodeo she broke the barrier riding Reya and got a check at her second rodeo riding Red Light. She’s been to seven rodeos and has won about $7,700. She’s excited to see what she can get done, but I’m not sure my wife is as excited about her new job title. She has been a professional driver, groom, and before we had kids, she took care of all that. She understands everything that goes into competing. She films, she drives, and she and Hali have a summer run planned out for Hali to try and make the Breakaway Finals. It was just announced those finals have moved to the South Point and will be held November 29th & 30th.

The rodeos and jackpots have given Hali an opportunity to make a living roping if she chooses. She has a few sponsors that are helping her go down the road. It’s exciting that my kids have these sponsors as young as they are. The other day we were talking about all the rodeos she was going to, and my son looked up and said, “Y’all are killing me. This is what I dream about doing and this is what you’re talking about!” He’s fifteen, an 8+ heeler, and doesn’t understand why he has to wait until he’s 18 to enter pro rodeos.

What’s new with me: Back in March, at the BFI, my back went out when I roped my first steer. Then while at Thomas Braman’s practicing for Corpus, my back slipped a little. On the way to the rodeo, I put some heat on it. Then I immediately put cold on it as I normally do with a pulled muscle. But when I arrived Wednesday night, my legs didn’t work. I was almost paralyzed from the waist down. The next day Thomas took me to his chiropractor. I kind of got where I could move around and think I’ll walk it off. It happened a third time and I called my friend Shawn Scott. Shawn is a very well known, and much in demand, chiropractor in our industry. Rich and I used to take him to the NFR every year and put him up in our hotel so we could get worked on every day.

Now he’s very popular with the Bareback riders and is at the NFR every year. I called and told him I needed an MRI. Then again on the Friday of Memorial Day weekend, my back goes out and I can’t move, I can’t do anything. Shawn tells me I have a disc that is bulging on my spine. We are going to try and rehab it slowly, hopefully without surgery. He put a back brace on me and within minutes I could function somewhat. Apparently when I was about 20, I broke my back. I remember being really hurt and down for about three weeks, but I didn’t get x-rays. A few years ago, I had an x-ray done and they asked me when I broke my back. You don’t realize how important it is to be able to move around… until you can’t. I can still teach, mostly from my lawn chair.

In this article:Breaking it Down, Industry News, Speed Williams, Team Roping
Up Next: