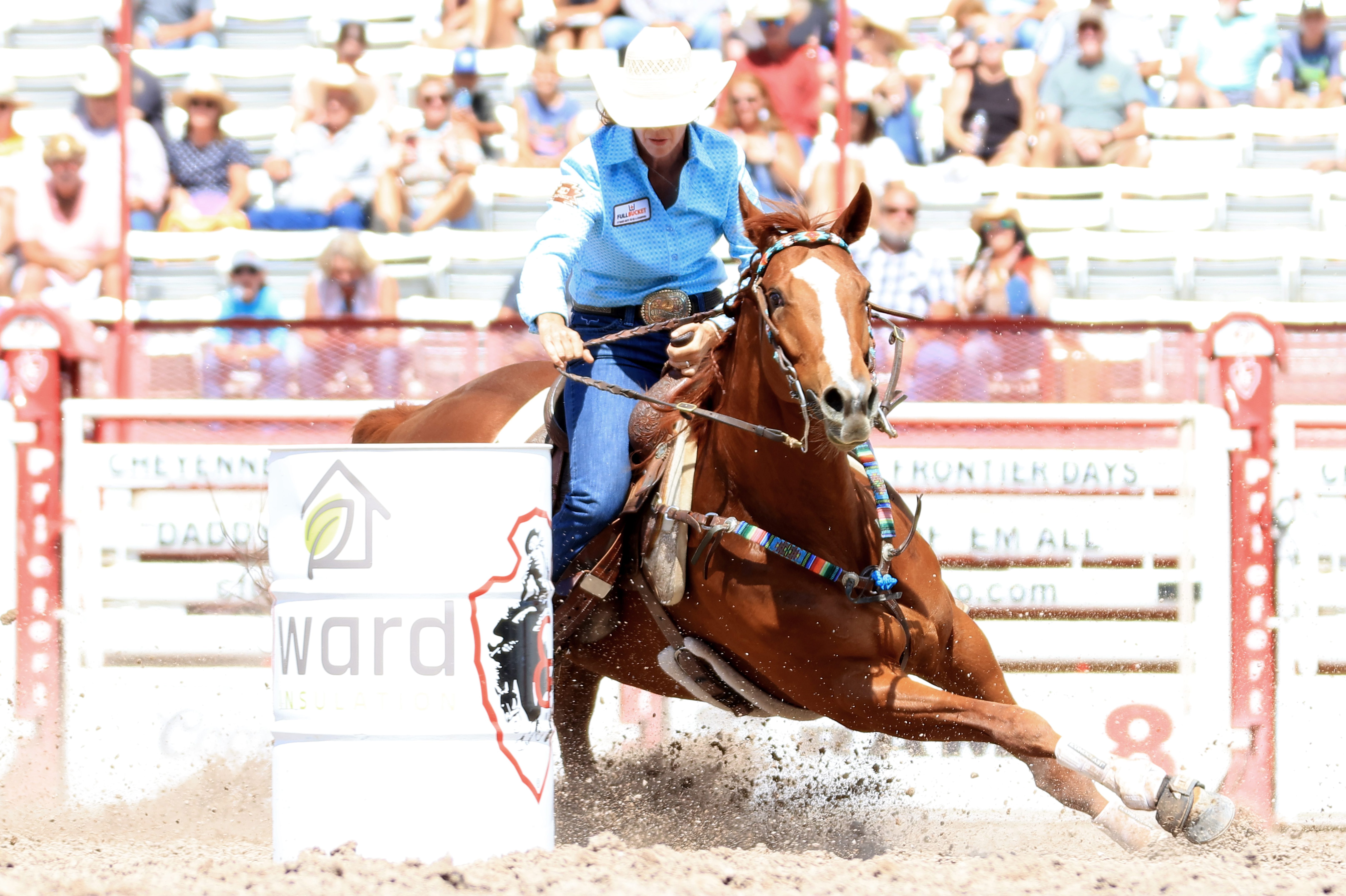 Andrea Busby of Brock, Texas, and Blazinwithmydude (Tito) clocked a time of 17.20 seconds to win the Quarter Finals 4 barrel racing at the 126th Cheyenne Frontier Days on Tuesday, July 26. The win at the “Daddy of ‘em All” was especially meaningful to Busby who grew up in Lusk, Wyoming, on a family ranch that has been operating in the state for 112 years. Photo by Jackie Jensen Photography

Busby’s family began The Bruch Ranch near Lusk (140 miles northeast of Cheyenne) in 1910, just 23 years after the first one-day roundup in Cheyenne and nearly a decade before Cheyenne Frontier Days earned the nickname the “Daddy of ‘em All.” Busby grew up near Lusk, then attended Montana State University.

On Tuesday she was the first barrel racer of the day. She stopped the clock in 17.20 seconds, one of the fastest times of the week, riding Blazinwithmydude, a six-year-old mare called Tito. That was the fastest time of the day and advanced her to this weekend’s Semifinals. She and her husband Jeff own Busby Quarter Horses and have connections to some of the top barrel racing horses in the industry. Famous Lil Jet, the 2021 AQHA Barrel Racing Horse of the Year, was purchased from the Busbys as a yearling by reigning world champion barrel racer Jordan Briggs.

Trey Kimzey of Strong City, Oklahoma, has an opportunity to earn a bull riding accomplishment that has eluded his famous older brother – win a CFD championship. Although Sage Kimzey has won seven bull riding world championships and numerous other awards, he has never won a title at Frontier Park. Trey, 23, is having his best season in pro rodeo and is currently ranked sixth.

On Tuesday he topped the first section of bull riding with 88.5 points on Rocky Mountain Rodeo’s bull Wolf of Wallstreet. Canyon Bass, an 18-year-old rookie from Johnson City, Texas, tied Kimzey’s score in the second section on Stace Smith Pro Rodeo’s bull #625. The riders with Tuesday’s top six scores advance to this weekend’s Semifinals. Another high-marked ride in the Semifinals would advance Kimzey for Sunday’s Championship Finals and give him the chance to be the first in his family to win here.

The women’s breakaway roping featured Tuesday’s toughest competition. Only four of 13 ropers missed their calves. The other nine women roped their animals in less than seven seconds. The fastest of the day was Missouri cowgirl Emma Charleston. She stopped the clock in 3.1 seconds – just one-tenth slower than the CFD record set last week during the qualifying rounds. Charleston, who was part of the rodeo teams at Northeastern Oklahoma A & M and then Tarleton State University in Texas is a two-event cowgirl in pro rodeo. She’s currently ranked 28th in the barrel racing world standings but did not advance to the CFD quarterfinals in that event.

Taylor Hanchey of Carmine, Texas, was second with a time of 3.9. Hanchey has also made her mark in both women’s events. She was the first woman to qualify for the National Finals Rodeo in barrel racing and for the National Finals Breakaway Roping. Her husband Shane Hanchey won the tie-down roping title at CFD in 2018 and Taylor would love to add her own CFD title to the family trophy room.