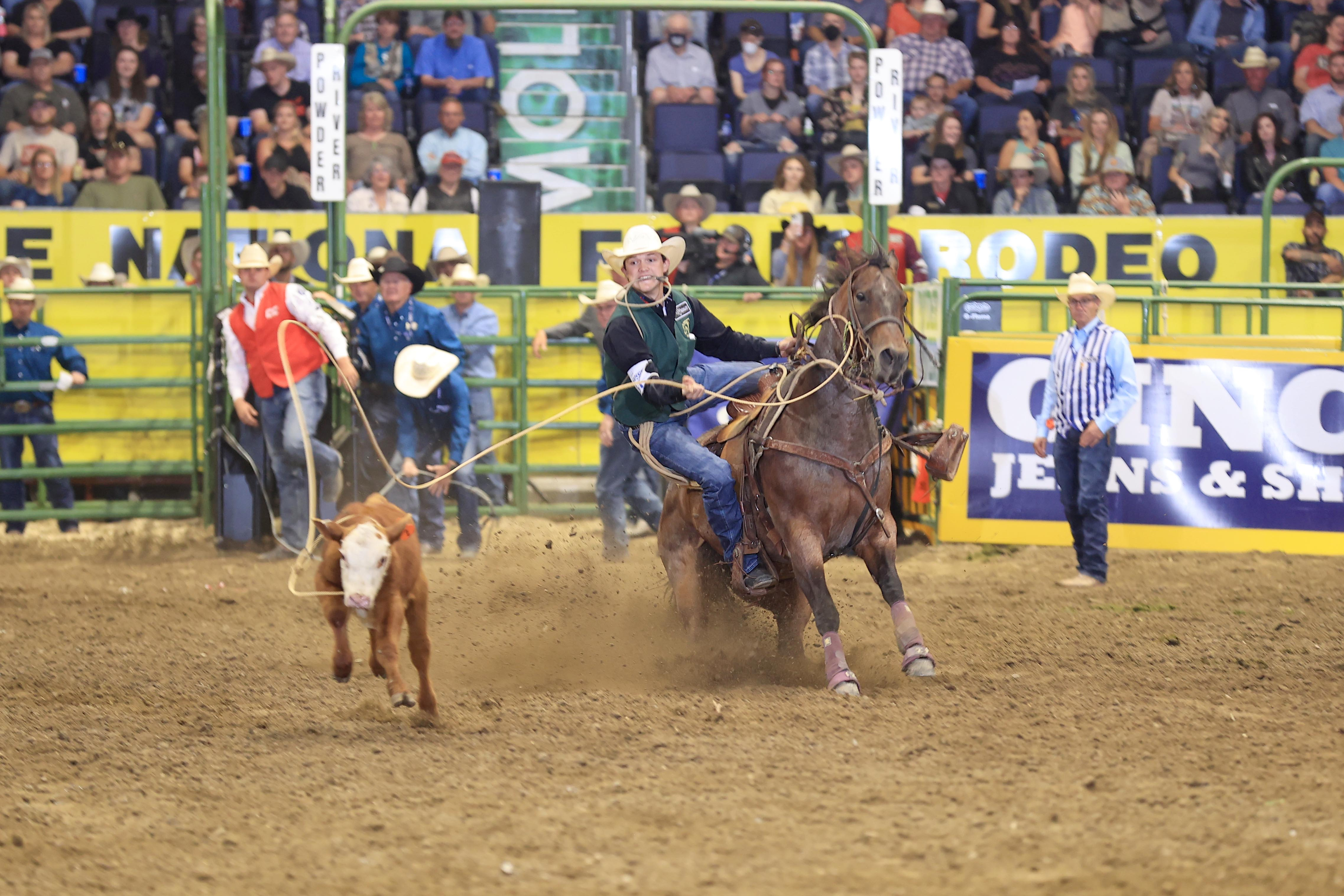 Kincade Henry takes the final lead in the last performance of the CNFR 2022. Champions were made in Casper. Photo courtesy of Jackie Jensen Photography.

CASPER, Wyo. (Susan Kanode, CNFR) – When the final night of the 2022 College National Finals Rodeo (CNFR) began Saturday at the Ford Wyoming Center in Casper, six reigning national champions had a chance to defend their titles and go home with back-to-back wins.

The bareback riding looked like a heavy weight match with reigning champion Cole Franks in the lead and 2017 winner Lane McGehee hot on his heels. But Ty Pope of Missouri Valley College who started the night in third place was not to be denied. Pope, who was among the top ten at last year’s CNFR, rode Vold Rodeo’s horse Capt. Hook for 85 points, the highest marked ride of the week. Pope’s teammate Franks, who won the title last year while attending Clarendon College but now rides for Missouri Valley, was last to compete and scored 81.5 on Vold’s Spicy Chicken. That left him one point short of Pope’s title, leaving him in the reserve spot.

Last year Panola College roper Kincade Henry watched teammate Macon Murphy win the national title in tie-down roping while Henry finished fifth. This year Henry came into the final night with the lead after three rounds and made a businesslike run of 9.0 seconds to capture the national championship. Henry, a sophomore ag business major, barely missed qualifying for the Professional Rodeo Cowboys Association’s National Finals Rodeo (NFR) last year. He is currently eighth in the pro ranks and could add his name to list of those who won a collegiate championship and qualified for the NFR in the same year.

Although he didn’t win a national title, Cisco College’s Trevor Hale made his mark in Casper. His time of 7.1 seconds in the tie-down roping set a CNFR record. That run secured him a reserve championship title.

Bryana Lehrmann, a graduate student in accounting at Texas A & M – Commerce had a half-second lead in the breakaway roping coming into the final round. While a half of second doesn’t sound like much, that is an eternity in an event where the fastest time of the week was 1.7 seconds. Lehrmann needed a solid run to rope her first national championship and delivered a time of 2.6. That was fast enough to tie for second in the final round and win the championship. She also tallied enough points to win the women’s all-around title by also earning points in the barrel racing.

Walt Arnold, a senior criminal justice major at Tarleton State University, won the steer wrestling national championship in commanding fashion. Arnold not only came into the finals with the overall lead, but he wrestled his steer in 3.7 seconds to win the final round as well. This is his third CNFR qualification, his third time to advance to the Championship Finals, but his only time to win a national title.

Goat tying was full of surprises. Kristin Reeves, a sophomore business major at Weatherford College, was the second athlete to set a CNFR record on Saturday. She came into the finals ranked eighth and set the record with a 5.5 second run. Maddie Doerr of Cochise College was ranked sixth until she made a 5.9-second run in the finals to take the national lead. McNeese State’s Kamryn Duncan was fifth, a tenth of a second faster than Doerr, and tied her goat in 6.0 to give both women a total of 24.9. Four women were still to compete, and none could clock a time faster than 6.5. That meant Doerr and Duncan tied for the national title.

The attention in team roping was on two pairs of brothers who were ranked first and second overall when the final round began. Mason and Logan Moore of Pleasanton, Texas, led the pack. Mason, a senior animal science major at Sam Houston State University, and Logan, a sophomore wildlife biology major at Wharton County Junior College, had roped three steers in 18 seconds and led Kellan and Carson Johnson, the reigning national champions and local favorites from Casper College by half a second. The third-place team of Riley Kittle and Jace Helton were 4.6 seconds behind the Johnsons. But Kittle of Woodland, Alabama, who competes for Cisco College in Texas where he is a sophomore welding major, and Helton, a sophomore business major at Weatherford College, caught their final steer and won the championship after the Moores and the Johnsons both failed to stop the clock in the finals.

Sadie Wolaver, a senior accounting major at Southwestern Oklahoma State University, was the barrel racing leader, but drew the last competition position giving her the worst ground conditions of the finals. She still made one of the fastest runs of the week – tying for fourth in the round with a time of 14.14 to win the national title. Taycie Matthews of East Mississippi Community College had not turned the barrel racing pattern in less than 14.40 during the first three rounds but qualified for the final round ranked eighth. The sophomore business and marketing major was the only barrel racer of the week to break the 14-second mark, winning the final round with a time of 13.86 and finishing as reserve national champion.

Casey Roberts of Munford, Alabama, was the only bull rider to ride three of four bulls. Roberts, a sophomore welding major at Three Rivers College in Poplar Bluff, Missouri, took the lead when he rode Vold Rodeo’s bull Out Cold for 82.5 points. Reigning national champion Tristen Hutchings of Sul Ross University had the lead when the night began but couldn’t stay on Vold’s bull Night Trip.

The men’s all-around title went to Cole Walker of the University of Tennessee at Martin. Walker, a junior ag business major from Sparta, Tennessee, made the championship round in both tie-down and team roping. He finished fifth in both events.