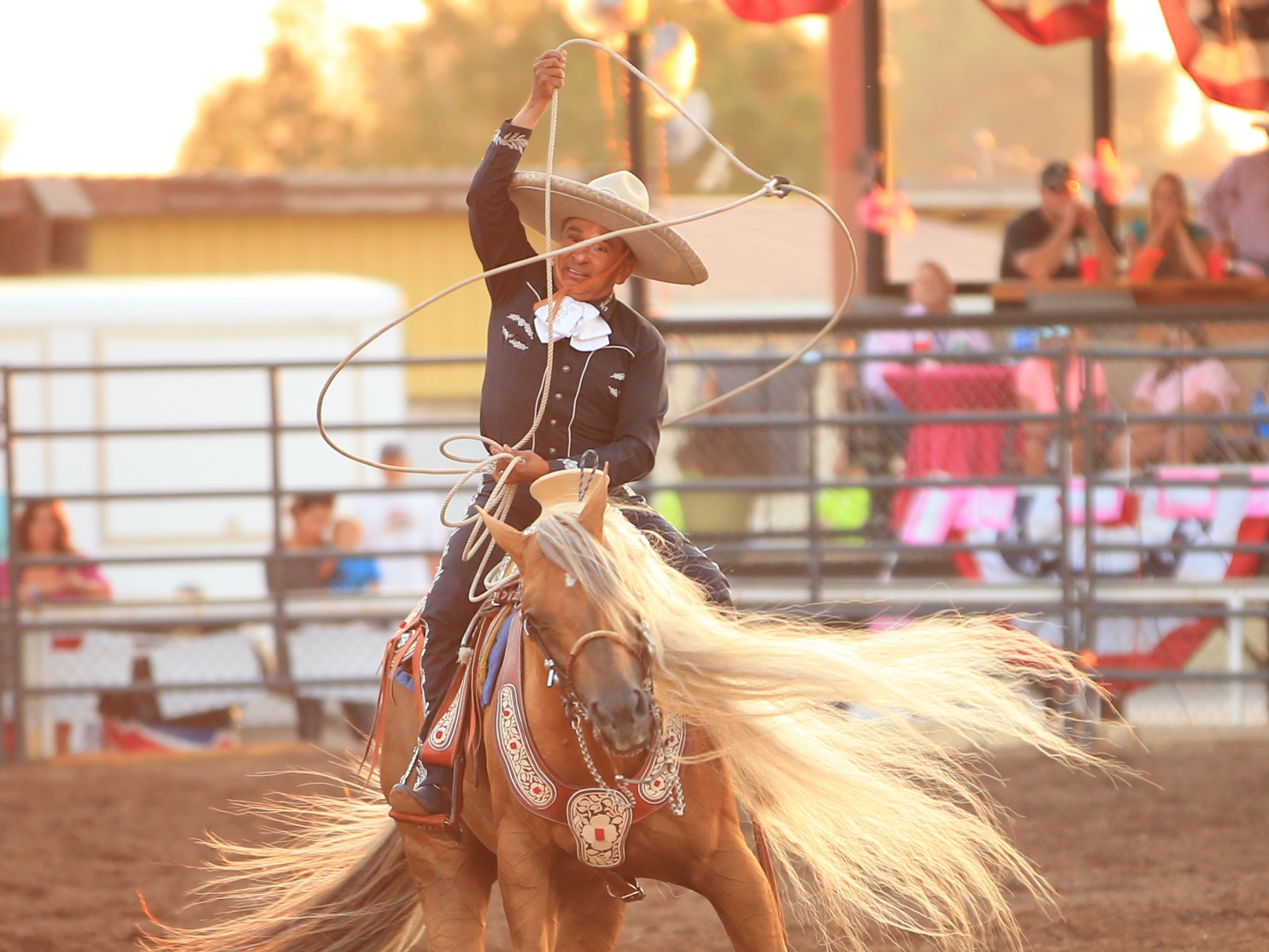 Mexican Charro Tomas Garcilazo does fancy trick roping on the back of his beautiful American Quarter Horse Hollywood. Garcilazo is the specialty act for the 2022 Black Hills Roundup in Belle Fourche, S.D. Photo courtesy Jackie Jensen.

Garcilazo was born and raised in Mexico City and as a child learned the rope work and horsemanship that comes with the family heritage. La Charreria is the official national sport of Mexico and, for Garcilazo, exhibits his skills aboard a horse.

On his beautiful mount, he does sliding stops, spins, turns, reining, side passes, all in Mexican style, choreographed to music. Garcilazo makes it look effortless, belying how much time he has put into his life’s work.

While he performs, he wears the traditional Charreria attire, proud to represent his culture through his outfits and skills.

During his routine, he incorporates fancy roping, standing on his horse and jumping through his rope, like the Texas Skip, and finishing his act with the Wedding Ring, a big loop rope trick with 70 feet of rope spinning around him and his horse as they walk around the arena.

Roping since a young age

Garcilazo grew up with a rope in his hands. “I didn’t have many toys,” he said. “My toy was my rope.” He competed in bull riding and roping at Mexican rodeos and moved to the U.S. when he was 22 years old. Since then, he’s spent two years on tour with the Will Rogers Follies, a six-time Tony Award winning show, performing in 48 states and two countries and twice in the White House. He’s been a featured performer at Disney’s Wild West Show in Paris for three years and performed at several horses shows in Holland, Germany and Italy. He’s performed for numerous Mexico presidents and at the Kennedy Center in Washington, D.C.

While in Paris, he met his wife, Justine, who is French. They have two sons: Louis, who is seven, and Gaspar, age nine months. Louis performs alongside his dad in the arena, and loves it. “I like doing stuff with my dad. I like trick roping, riding, and practicing. It’s so much fun.” He dresses in charro costume, like his dad, and ropes in sync with him, wowing the crowd with his superb trick roping.

Louis has a rope in his hand wherever he goes, his mom reports. “It’s even hard to go to the grocery store without one,” she laughed. But she and Tomas are pleased that their older son shows an inclination for charro and performing. “It’s great that he’s loving it. It’s something he’s passionate about, and it’s nice that the legacy and the heritage keeps going.”

Tomas and Justine’s youngest son, Gaspar, is less than a year old but already showing signs of loving horses. When they put him in the saddle with them, as the horse stands still, “he doesn’t want to get off, and he moves like he’s riding,” Justine said.

Garcilazo, a four-time PRCA Dress Act of the Year Award winner, has performed at the Wrangler National Finals Rodeo 25 consecutive years, starting in 1997. He’s one of the few rodeo acts who has worked the rodeo so many years in a row, because he’s a fan favorite and a professional at what he does. Tomas and his family won the TBS Show Go Big contest in March, winning $100,000.

He is a third generation Charro, devoting his life to sharing Mexico’s National Sport La Charreria with the world. He and his family live in Stephenville, Texas.

His love for his art is evident to rodeo fans around the world, who see it through his relationship with his horse and skills with a rope. “I’m passionate about what I do.”

The Black Hills Roundup kicks off June 30 and runs through July 4 with nightly performances at 7 pm, except for July 4, which is a 3 pm matinee. with a ranch rodeo at 7 pm. Family night is July 1; July 2 is Chutes for Charity night, and July 3 is Tough Enough to Wear Pink night. July 4 is Military and First Responders Day.

General admission tickets are $15 for children 12 and under and $24 for adults. Reserved seating tickets $29-$34. They can be purchased online and at the gate.

For more information, visit the website at BlackHillsRoundup.com or call the Black Hills Roundup Office at the Tri-State Museum and Visitor Center at 415 Fifth Avenue, Belle Fourche, S.D. (605.723.2010).

Black Hills Roundup features the best in the business