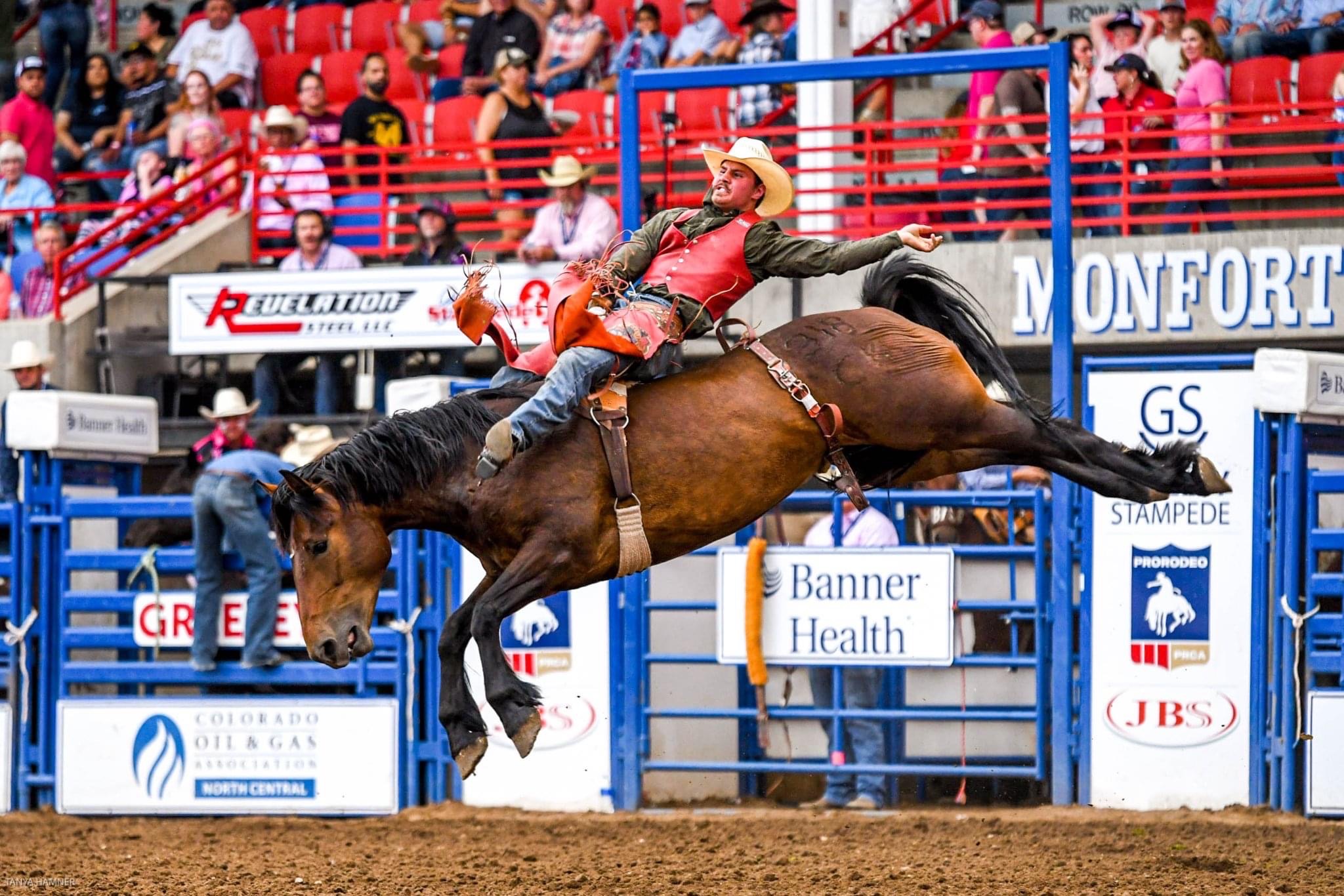 photo courtesty of the Greeley Stampede

Cowboy Christmas, centered around the 4th of July, gives plenty of cowboys and cowgirls a chance to shake up the world standings and to bolster their earnings on the way to the top 15 in the PRCA standings.

Nowhere was this more evident than among the barrel racers. While Jordan Briggs maintained her lead in the event, earning $18,465 over Cowboy Christmas, Wanda Johnson was able to move up a spot from third to second place.  Stevie Hillman also moved a spot, from seventh to sixth place. Shelley Morgan padded her earnings by $20, 868 and moved from 13th to 9th place. The big move, however, was by Bayleigh Choate. Her winnings, $26,267 jumped her all the way from 12th to 5th in the standings.

Saddle bronc rider Brody Cress took second at Livingston, adding $3,805 to his winnings. He was third in the PRCA standings after the Cowboy Christmas run, with total earnings of $113,679.  Sage Newman was in the top spot with $167,015, followed by Stetson Wright at $124,904. The Livingston winner was Dylan Schofield, earning $4,963.

Cress and his travel partners, Lefty Holeman, Wyatt Casper, and Jake Clark went to Panoka, Alberta, Canada; Oakley, Utah; Livingston and Red Lodge, Montana; and Cody, Wyoming for their Cowboy Christmas Run.  Cress said Cowboy Christmas was a little slower this year than usual. He did not always get a good draw, but said he “can’t complain” about his run. Cress said Panoka is one of his favorite summer rodeos. “They do a great job there, they bring in good horses, and Canada loves rodeo!”

Team roping header Clay Smith broke both bones in his lower leg in a barrier-related accident at Prescott on June 28. He missed Cowboy Christmas but was back in action at the Central Wyoming Rodeo in mid-July. He and Jake Long had a time of 5.2 on their steer.

Stetson Wright has been riding with a broken wrist. He finally decided to have it looked at following the Greeley Stampede. Since then, he has increased his All-Around lead to $266,801.

Some of the biggest payouts are available to contestants not only during Cowboy Christmas but all throughout the month of July.  Cress and his partners are chasing that money.

The men are coming off of the Calgary Stampede, and will be going to Nampa, Idaho; Spanish Fork, Utah; Salinas, California; Cheyenne; Deadwood, South Dakota; Pollockville, Alberta, and Bismarck, North Dakota next. Despite the misfortune of his truck breaking down in Calgary, Cress said he won around $15,000 there. He did not make it back to the final four.

With some big rodeos still coming, the standings will probably keep changing throughout the rest of the summer.