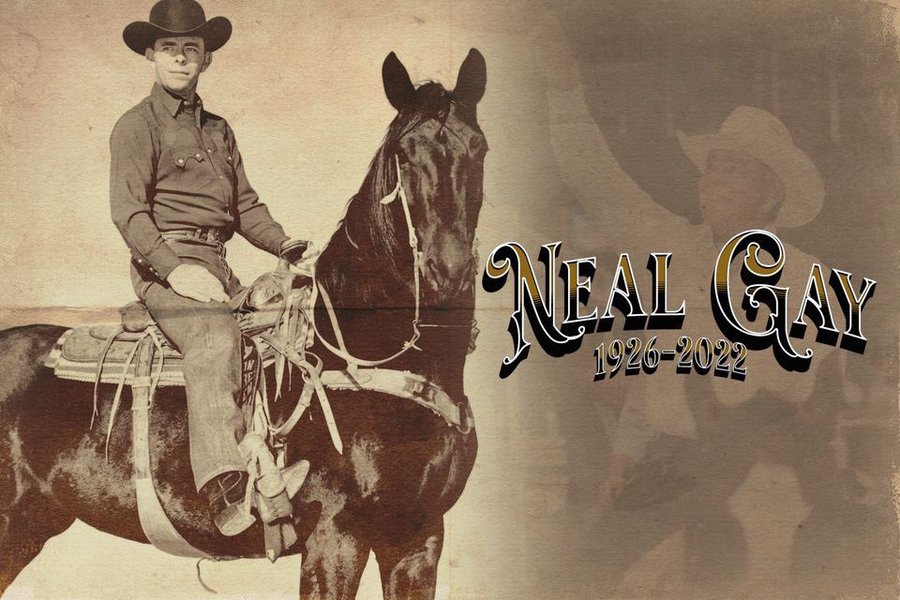 World-renowned stock contractor Neal Gay, a ProRodeo Hall of Famer, passed away Aug. 11 at his ranch in Terrell, Texas with his family by his side. He was 96.

Gay was inducted into the ProRodeo Hall of Fame in Colorado Springs, Colo., in 1993. His professional rodeo career began as a contestant in Atoka, Okla., in 1945.

In 1957, Gay founded Rafter G Rodeo, which still runs strong in the heart of Texas three generations later. In May 1958, Gay put Mesquite, Texas, on the map with the opening of the Mesquite Championship Rodeo in partnership with several other cowboys. The rodeo has grown from a small Saturday night rodeo to a cultural icon watched by millions on TV each year.

Gay spoke on his rodeo career in an Dec. 31, 2016, article in the ProRodeo Sports News, when Neal and his son Don became the first father-son duo to be awarded the Legend of ProRodeo.

“It was a tough racket to make it, but I’ve enjoyed every minute of it,” Neal said. “I have never been sorry that I got into the rodeo business. I always liked it, and my family liked it. It has been a blessing to me.”

Rodeo runs in the family for the Gays. Neal’s son Don, a ProRodeo Hall of Famer himself, is an eight-time PRCA Bull Riding World Champion. Pete, qualified for the National Finals Rodeo in 1972-73 and 1976 as a bull rider. His other son, Jim, runs the family’s rodeo stock producing business.

“He would always say ‘God was first, family was a close second, and the rodeo was right in after that’,” said Jim Gay. “He loved rodeo and his bucking horses and bulls. One of his best things he used to say was that he lived a blessed life because he gets to wake up every day and be a cowboy.”

Casey Harp, Assistant General Manager of Rafter G Rodeo, said without Neal Gay rodeo wouldn’t be what it is today.

“With the passing of Neal that really brings to a close the greatest generation of PRCA stock contractors,” said Harp. “They were the founders of our industry, and they kept it going all these years. They were the ones that made it all happen and every one of us owe those men a great debt for what they have done for us.”

Gay also is a member of the Texas Hall of Fame and was the recipient of the Ben Johnson Memorial Award from the National Cowboy Rodeo Hall of Fame in 2009.

A memorial service for Neal Gay will take place at 1 p.m. (CDT) on Aug. 23rd in Fort Worth, Texas at the Will Rogers Memorial Coliseum.