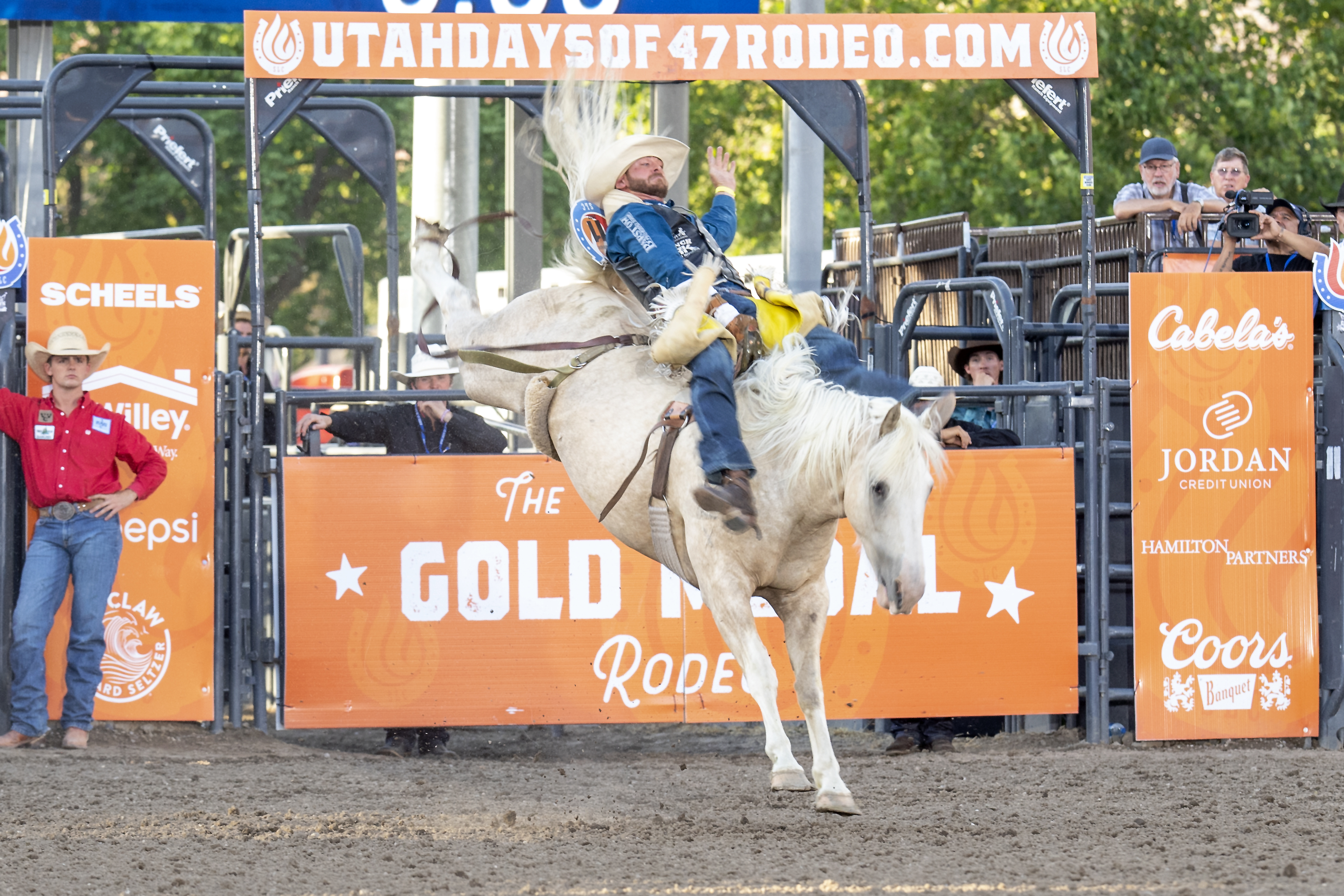 SALT LAKE CITY – Riding an incredible wave of momentum, RC Landingham (Hat Creek, California) produced what was one of the most ferocious bareback title races in WCRA history. The 30-year-old was the undeniable star of the rodeo going last in delivering what would be the most groundbreaking performance of the event. As only one of two athletes remaining Triple Crown of Rodeo eligible in the Gold Medal Round of competition, his 90.5 ride elevated him to a $25,000 payday. For Landingham, fresh off his win at May’s Rodeo Corpus Christi, the event marked his second consecutive WCRA Major, putting him in contention to be a millionaire. If Landingham triumphs at WCRA’s Cowtown Christmas Championship, he will be the first victor of the WCRA Triple Crown of Rodeo $1 Million Bonus.

Not only did Landingham emerge victorious but did so by defeating 3x World Champion Tim O’Connell (Zwingle, IA) and Dean Thompson (Altamont, UT).

As the one of only three tie-down ropers to deliver a qualified run, Shane Hanchey (Sulphur, LA) found himself with a edging out Ace Sloan’s (Cuero TX) 10.33-second time and Nate Baldwin’s (Blackfoot, ID) 9.12-second run.

20x World Champion Jackie Crawford (Stephenville, TX) loaded into the box after no other breakaway ropers earned a qualified run. The 2x WCRA Champion, who set an arena record on Thursday afternoon with a 1.91, sprung out of the box in the Gold Medal Round to earn a swift 2.36-second time. Coming into the event as the No. 1 leaderboard athlete, Josie Conner (Iowa, IA) loading into the box with a winner-take all mentality. The Louisiana native not only won the event and beat the world champion, but set an arena record with an 1.85-second run.

In Bull Riding, two athletes delivered a qualified ride. Cole Fischer (Jefferson City, MO) was first out and set the bar high with an a 90-point ride. Deklan Garland (Foster, OK), edged Fischer’s score with an 89.5, to take home a silver medal.

On July 31 at Noon ET fans will be able to tune into the Gold Medal Round at the Utah Days of ’47 Rodeo on a CBS network broadcast.

In this article:Cowtown Christmas, Days of 47 Rodeo, Industry News, Triple Crown of Rodeo, Utah, WCRA
Up Next: