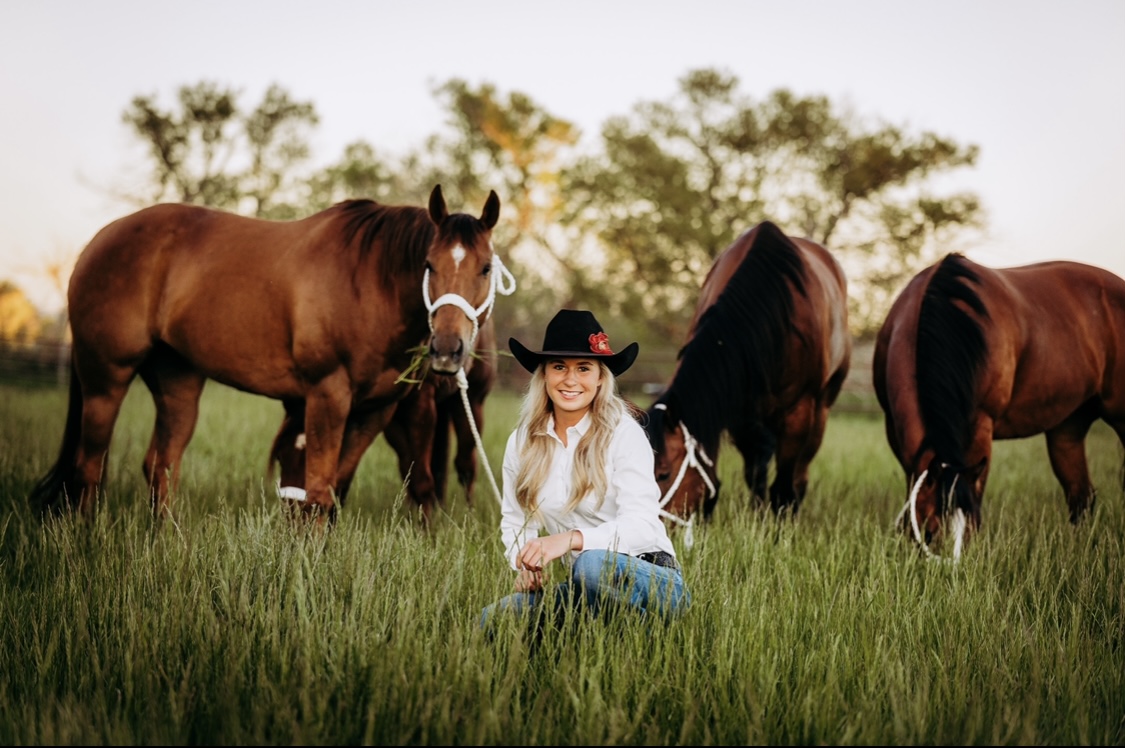 Rayne Grant is proud to be from Wyoming. Raised on her family’s ranch near Wheatland, it is only fitting that the high school graduate took home two world titles from a few hours up the road in Gillette. Grant won all around honors, pole bending, and was reserve national champion in barrel racing.

Gillette again hosted the National High School Finals Rodeo July 24-30, so the 170 mile drive allowed her whole family to be there for most of the week. Having her father Mike there was a highlight for her. “He practices with me every day […] He’s helped me since I was little. It was really cool to have him there at the finals helping me. To share that success with him was pretty special,” Grant says. She is grateful, too, for her mother Becky and for all of her support.

Grant has one horse to thank for her dominance throughout the week: a sorrel mare called Chili. Registered name VF A Famous Lady, Chili not only smoked the barrel pen throughout the week, she won two rounds and the average in the pole bending. Their short round run was a cool 19.5, the fastest of the whole week. “I just let it all out. I just made my runs and let Chili do her thing,” she says. Times like that aren’t out of the ordinary for the pair. Rayne and Chili ran a 19.4 at the Wyoming High School State Finals, as well.

When the short round crowd heard this Wyoming cowgirl’s name announced, cheers erupted. “The crowd was insanely loud. It was a really cool moment that I’ll remember forever,” she says. Spectators following her throughout the week would notice that she was wearing a back brace. In fact, she was wearing the back brace for nearly a month. A week before her state finals and a month before nationals, one of Grant’s horses fell with her, breaking three vertebrae in her back.

After an examination, she and her doctor decided that she would be able to compete. “It was painful, but I wasn’t going to hurt it anymore,” she said. Not only did she expertly jockey Chili in barrels and poles, she also competed in the physically demanding event of goat tying, finishing 11th in the average.

All of her efforts throughout the week meant that she came home with the coveted all around honors, and Chili was honored as the Girls AQHA Horse of the Year. Chili was purchased from another Wyoming cowgirl, Karson Bradley of Big Piney, when Grant was a freshman. Though she was started well on the barrels, Grant trained her for pole bending, saying that she was a “natural” due to her athleticism. “She loves the poles,” she says.

Thousands of hours in the practice pen paid the price for Grant’s fairytale week. She considers herself fortunate to spend her winters in Wickenburg, Arizona, completing her high school education online and training her own horses. “It’s given me the opportunity to ride young horses and be exposed to that world more. It’s such an advantage to rope every day in the sunshine […] Anytime you have success or see your young horses progress, it’s really cool, and it gives you that bug to keep going,” she says.

This winter will look a little different for Grant, as she begins her college rodeo career at Laramie County Community College in Cheyenne. Though she won’t be in the sunshine of Arizona as much, she is grateful for the opportunity to practice in their phenomenal facilities and begin in-person college classes. Plus, she will remain in her home state, where everyone is “genuine” and she is close to her family ranch. “Wyoming is the best,” she says.