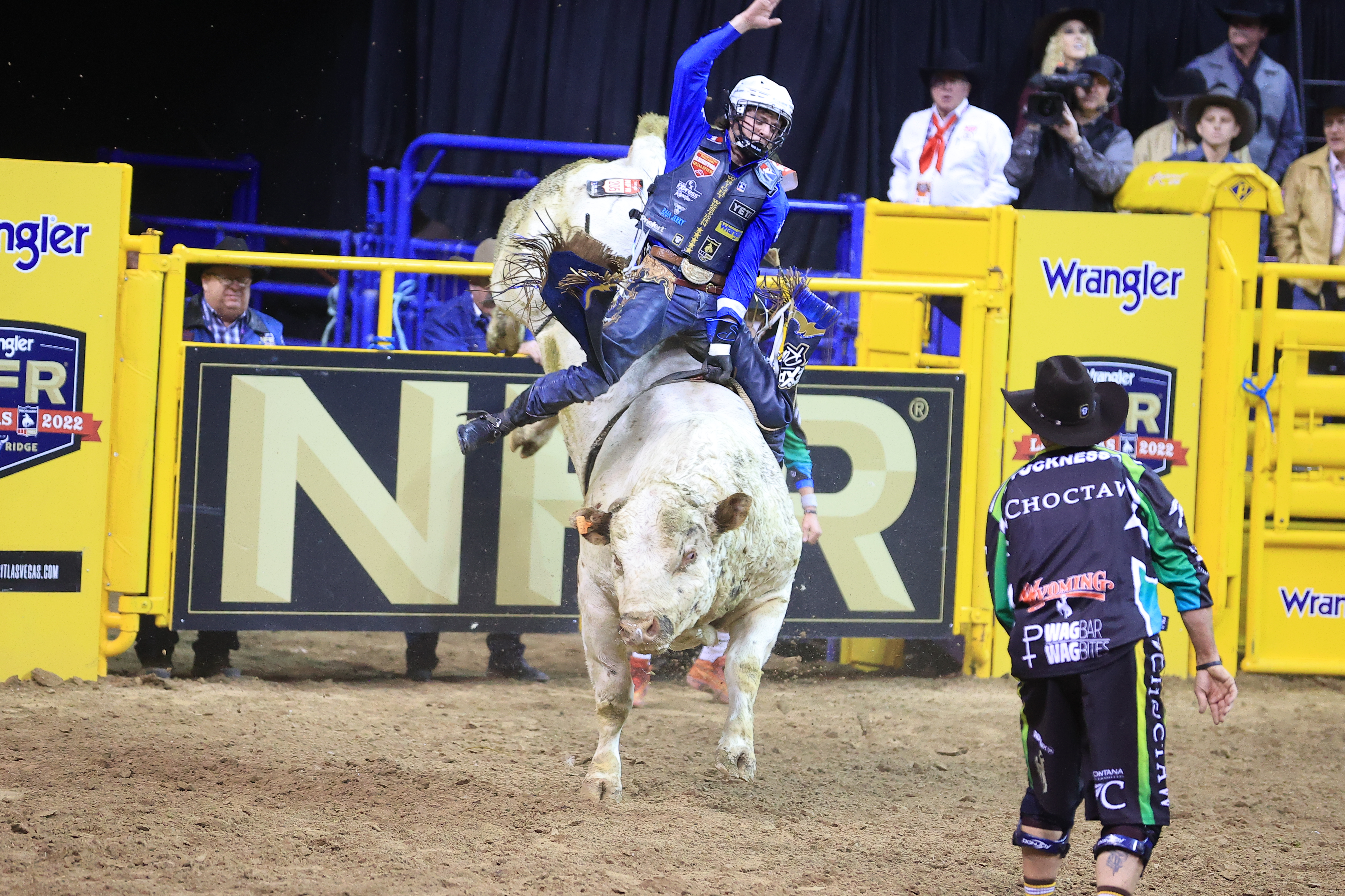 LAS VEGAS – The victory train that is Stetson Wright is unstoppable.

In Round 8, the Milford, Utah cowboy won his first saddle bronc riding round and added his third bull riding round win Thursday before 17,506 spectators at the 2022 Wrangler National Finals Rodeo (NFR) presented by Teton Ridge at the Thomas & Mack Center.

Wright had a 90.5-point ride on Bar T Rodeo’s Hell Boy to capture the Round 8 victory.

Then, he came back a short time later and split the bull riding victory with 90.5-point ride on Bar T Rodeo’s Angels Landing. Ky Hamilton, who is Wright’s traveling partner, shared the Round 8 win as he was 90.5 points aboard Dakota Rodeo’s Bubba G.

“I mean it was just awesome. I’ve only won both events one time at the 2020 NFR in Round 7 and I’ve craved that moment ever since,” said Wright, 23. “It’s such a hard thing to do. It means you were better than 28 other guys in a night and that’s insane. I ended up drawing well and the best thing about it was that both of my matchups were from Utah.

“Best round win I’ve ever had in my life. This is an unforgettable moment for us. We travel together all the time and are around each other 24/7. We’ve been to the NFR for three years together so to get this round win together, it’s awesome.”

Wright has earned $295,765, counting ground money in bull riding. Wright holds the record for most money won at a single NFR when he earned $313,898 in 2020 in Arlington, Texas, at Globe Life Field.

Hamilton also was excited about his eight seconds of work.

“I’d seen that bull before, but I’ve never been on him,” Hamilton said. “He’s a big bucking bull with a lot of up and down in him, the kind that I really like. I knew he’d suit me well and he was everything I thought he was going to be, and it worked out well.

“It’s funny, I don’t get nervous here at all. It’s almost like something’s wrong with me. It’s weird. It’s the biggest rodeo and I don’t feel anything. I feel exactly how I feel right now when I’m getting on. I believe that works in my favor because in bull riding it’s all about reaction and being able to adjust to what the bull is doing. It’s not a bad place to be calm, cool, and collected.”

“I would say that was the best thing that happened to me this week,” Wright said about being bucked off in Round 7 in saddle bronc riding. “It sounds really weird, but when you exit yourself from the average race, all of the stress is off. I’m still in the World Title race and now I can focus on winning rounds. I’ve never been an average rider and I felt like me getting bucked off last night reminded me that I wasn’t.

“I don’t think there’s a bull or a horse that should buck me off. I know that happened last night, but I feel as confident as ever,” Wright said. “I’m just having fun.”

Wright, who is the reigning PRCA Saddle Bronc Riding World Champion, is second in the world standings with $299,887. He is splitting sixth in the average.