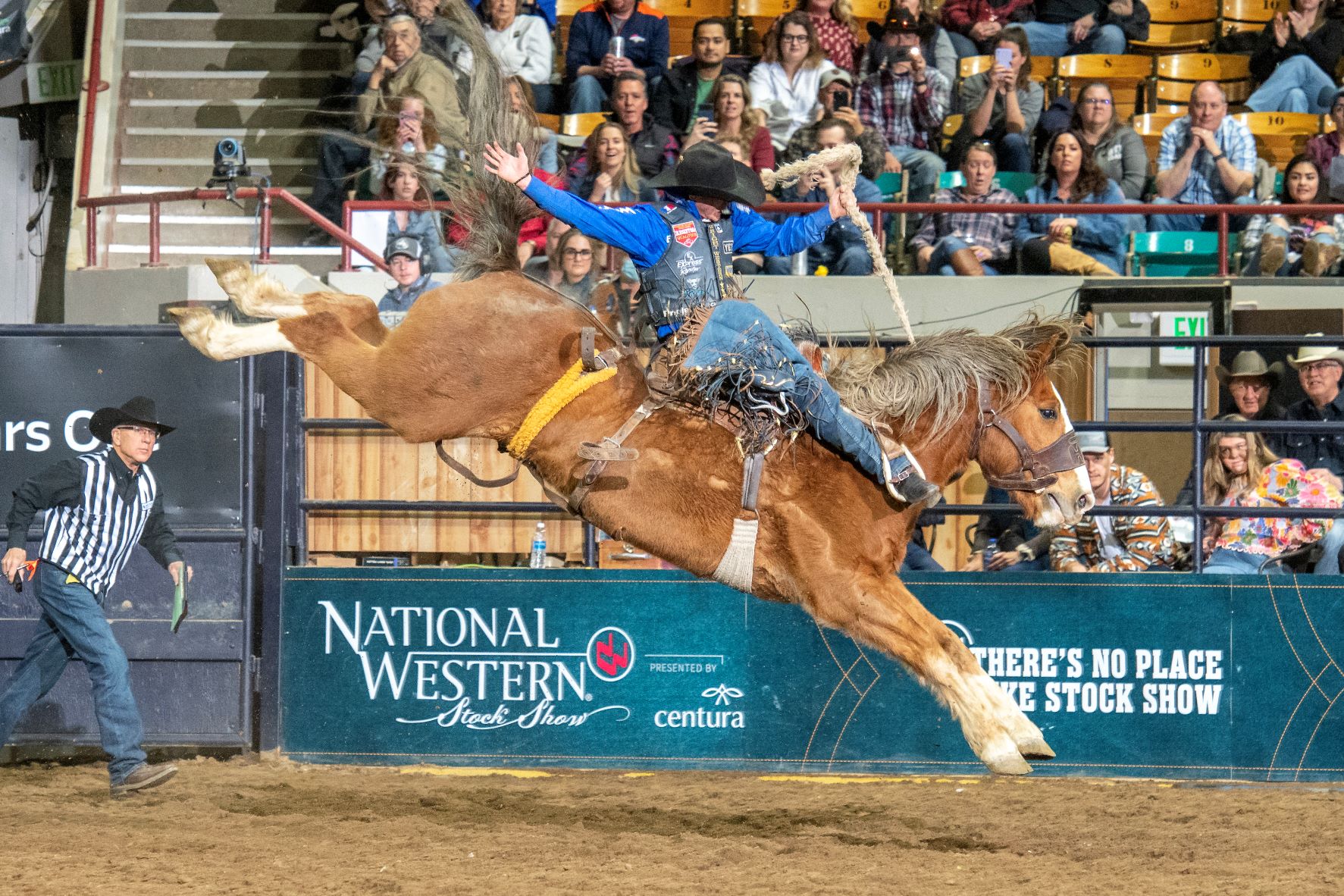 Stetson Wright is headed to the semifinals at the National Western Stock Show Rodeo in the saddle bronc riding and bull riding after a stellar performance in the Denver Coliseum on Saturday. Wright from Milford, Utah started his Saturday with an 84-point ride on Kirsten Vold Rodeo’s horse Double Trouble. NWSS photo by Ric Andersen.

DENVER, Colo. – Nobody competing at the National Western Stock Show rodeo has a resume like 23-year-old Stetson Wright of Milford, Utah.

Wright joined the Professional Rodeo Cowboys Association in 2018, following in the footsteps of his father Cody Wright and older brothers Rusty and Ryder Wright who are saddle bronc riding superstars. What Stetson Wright has done differently than his family members is ride bulls. That has earned him four world championships in the all-around category. He also has won two gold buckles in the bull riding and in 2021 added his name to the list of world champions in the saddle bronc riding. His father and brother Ryder have two of those world titles. His uncles Jesse Wright and Spencer Wright each have earned one.

With his success, Stetson Wright has earned championships at many rodeo’s across the country. One that has eluded him since he joined the PRCA in 2018 happens in the Denver Coliseum. He has never won the National Western Stock Show Rodeo and with his success on Saturday, he put himself in position to win titles in both of his events.

Wright started at the Saturday matinee performance by getting the high-marked ride in the saddle bronc riding and the bull riding. He rode Kristen Vold Rodeo’s horse named Double Trouble for 84 points to take the early lead. Then he got on a bull named Magnum owned by Cervi Championship Rodeo for 87 points.

He came back Saturday night and was again at the top of the leaderboard in saddle bronc riding after scoring 82.5 points on a horse of Cervi’s named Hero. About two thirds of the way through the eight second ride, the halter came off of the horse and Stetson was left with no control of the horse’s head. While he didn’t get extra points, he was able to stay on and took the overall lead with 166.5 points.

He wasn’t as successful on his second bull during the Saturday night performance, however he is likely to advance to the semifinals next Saturday based on his one high score.

There are two performances in the Denver Coliseum on Sunday at 2 and 6:30 p.m. where contestants in Bracket 4 will be vying for their spots in next Saturday’s semifinals.