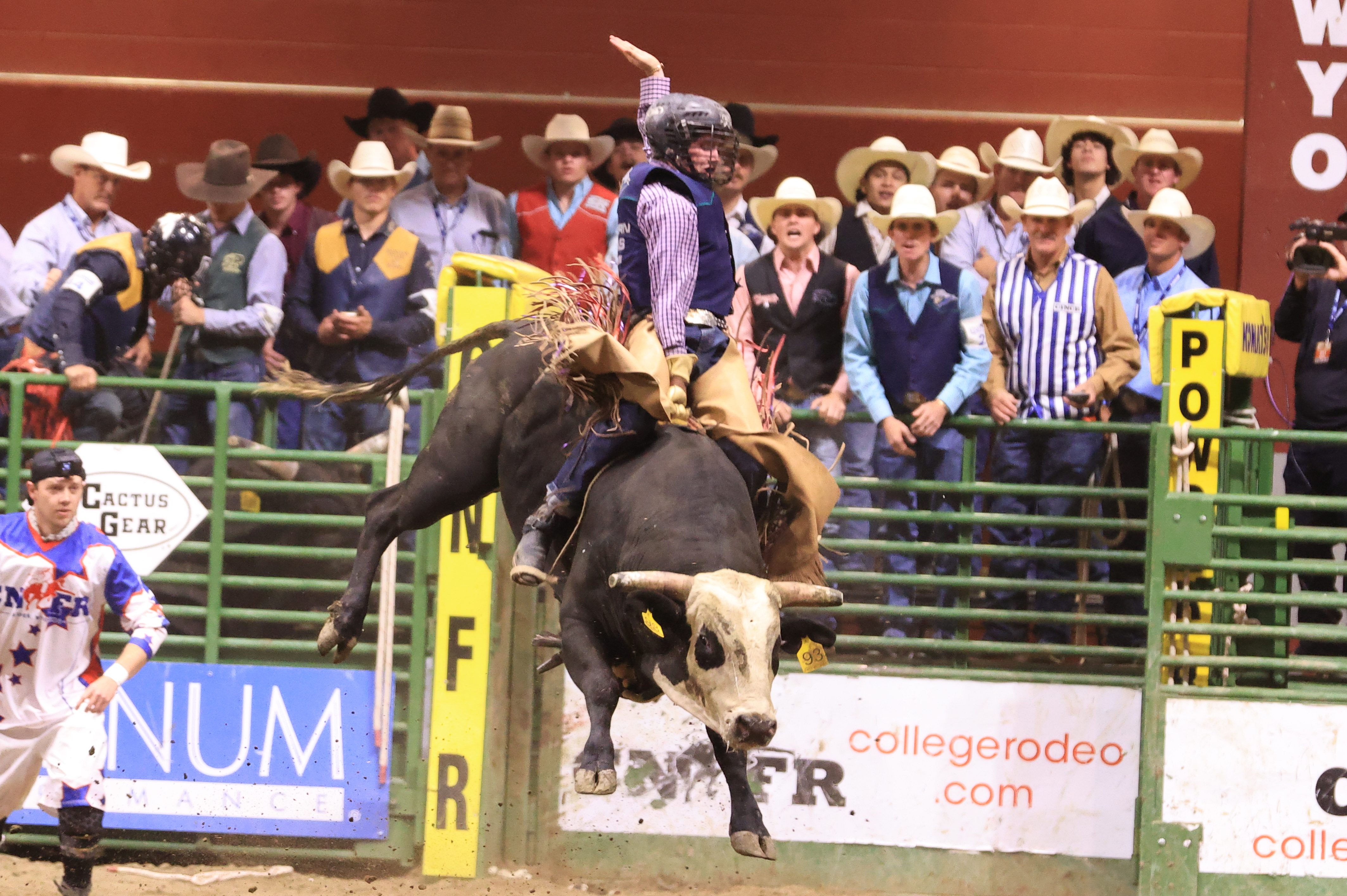 Rawley Johnson scores an 82 on Dark Knight during Friday's performance of the CNFR. Photo Courtesy of Jackie Jensen Photography

CASPER, Wyo. (Susan Kanode, CNFR) – The third round of the 2022 College National Finals Rodeo (CNFR) wrapped up Friday night at the Ford Wyoming Center in Casper, setting the stage for Saturday’s Championship Finals. The top 12 fastest times and highest scores over the first three rounds qualified for Saturday night’s finals.

In breakaway roping Bryana Lehrmann, a graduate student in accounting at Texas A & M – Commerce clocked the fastest time of the night – 2.2 seconds. That tied her for fourth in the round. Her total of 6.6 seconds on three calves moved her into the overall lead by half a second. She is also one of two women who can win the all-around title.

McNeese State University heads into Championship Saturday holding the top two spots in saddle bronc riding. Shea Fournier held the lead when the night began, but his teammate Ryder Sanford overtook him after a 73.5-point ride on Triple V Rodeo’s horse Swan Lake. Sanford, a senior engineering major, had won the first two rounds and slipped past Fournier by two and a half points.

The goat tying competition was fierce. The second competitor – Sierra Spratt of Cal Poly-San Luis Obispo – set the pace with 6.6 seconds. She tied for the overall lead with her teammate Aimee Davis. Mersadie Martin, who competes for Sam Houston State University, had been the only cowgirl to clock a time under six seconds this week. Martin, a senior animal science major, won the first round with a time of 5.7 seconds. After a respectable but unspectacular 7.0 in round two, she came back in round three with the week’s second time under six seconds, winning the round with 5.9 and edging the Cal Poly contingent by one-tenth of a second.

Brothers Kellan and Carson Johnson of Casper College are crowd favorites at the Ford Wyoming Center. Not only are they local boys whose father is the college rodeo coach, but they are the reigning team roping champions at the CNFR. They brought the crowd to their feet with a time of 5 seconds which put them second in the round and second overall. They will have a chance to win a rare repeat title Saturday night.

Texas A & M’s Victoria Proctor was only able to place ninth in round three of barrel racing with her 14.34-second run. The junior ag business major had finished fourth in the first two rounds and her total time of 43.06 puts her second heading into the finals.

National championships in nine individual events along with the men’s and women’s all-around and team titles will be awarded following the Championship Saturday competition which begins at 7 p.m.