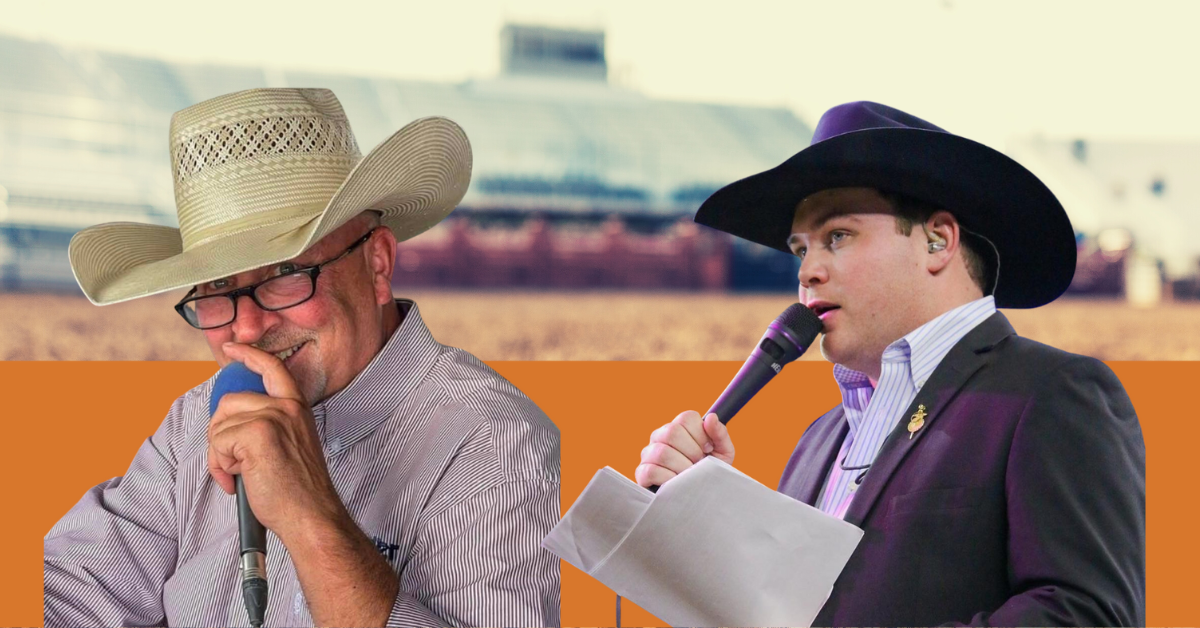 Although you may not know Douglas Van Dyken’s face, you probably know his voice. You might recognize his voice in an instant if you are a World Series team roper in Montana or Arizona. The WRANGLER region is home to a handful of great announcers, including Van Dyken who has been working in the area for about 13 years.

As a child, Doug was intrigued by the announcer while attending the college finals rodeos that were held in Bozeman, MT. While he worked on his family’s farm, Van Dyken began imitating the announcer he’d heard. The childhood phase passed though, and he decided to take on team roping as a hobby and a large part of his life.

Van Dyken roped to pacify his cowboy dreams while he continued to farm wheat and hay with his family. In 2009 though, his team roping career came to an abrupt halt due to a broken pelvis and the loss of both his horses with separate injuries.

“Sometimes I think the good Lord is trying to lead us in a certain direction, and sometimes I don’t take hints very well,” said Van Dyken. “I think He had to take away absolutely all my options to keep roping.”

Doug’s passion for roping proved strong, and with no way to compete he reached out to a producer of some local ropings and asked if he could announce. Rodeos are fast paced for the most part, but team ropings and barrel races can drag on while you’re watching the same event for days at a time. Van Dyken tries to make events as entertaining as possible and hopes the fans can enjoy it as much as the competitors.

Van Dyken has announced many ropings, Royal Crown Barrel Races, the Northern International Livestock Exposition, the Title Fights and countless events in between.

As many roping enthusiasts do, Van Dyken heads south when the cold starts to settle on The WRANGLER region.

“You get to see a lot of new faces and make new friends, people come from all over the country and Canada go to Arizona for the winter,” Doug said.

Van Dyken puts a lot of time on the road. So does Garrett Yerigan, the youngest man to ever win PRCA Announcer of the Year.

Yerigan spends 40 to 45 weeks a year on the road, and has been to 25 states, 3 Canadian provinces, and two Australian states during his career.

Van Dyken, Yerigan, and many other announcers have one big commonality: passion for their sport.

Yerigan grew up in a rodeo family but was never truly drawn to competing, his attention was always on the announcer’s stand.

“I announced my first full rodeo when I was 12-years-old,” said Yierigan. “it was an IPRA rodeo in Butler, Missouri.”

From such a young age, Garrett set the groundwork needed for a successful career announcing rodeos. He has announced the International Finals Rodeo seven times and in 2014 set a record as their youngest announcer. Yerigan’s voice has also been heard at The American, Cheyenne Frontier Days, High School and Junior High National finals rodeos, PRCA Xtreme Broncs, PBR Velocity tour and many other western events.

There is no school or formal training nedded to become an announcer. Yerigan says the main goal is to relay your own enthusiasm of the sport to the fans in the stands.

“So much of sports broadcasting is telling people what you’re watching, and being a fan of the sport hopefully helps me relay that passion to the fans,” said Yerigan. “Whether they’re new rodeo fans or they’ve been around it their whole lives.”

“There’s a few more big rodeos I’d love to get to announce. Above all, I just want to keep enjoying this incredible journey that God has put me on,” Yerigan said.